this one is a sort of an experiment with fun limited colors. i also fucked around a bit with action lines so she looks a bit more natural than she wouldve otherwise. i think so anyways

the background is a collage of images from new york city and the kowloon walled city in hong kong. i fucked them up with dithering 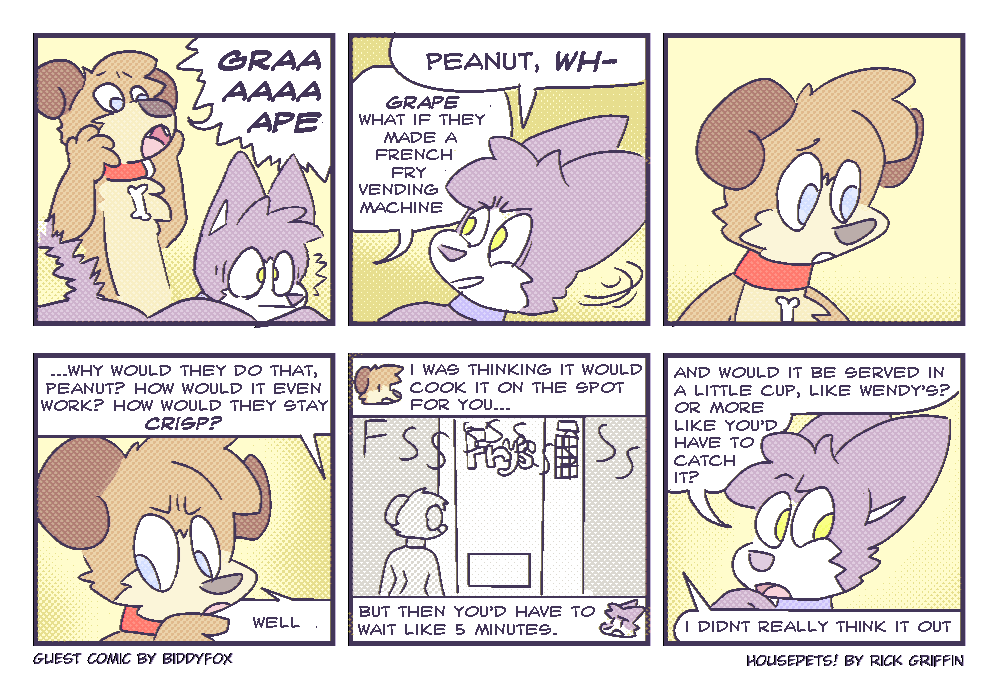 good lord am i proud of this. this was my first attempt at a guest comic entirely of my own for a comic ive been reading since i was 9 fuckin years old and not only did it get accepted but it got released on my fuckin birthday!!! can you believe that??

ive been told people have sampled it for memes on reddit but luckily i go out of my way not to use reddit because its a fucking cesspool. that does make me feel good about my work though. the idea behind this one is that it would be kinda something like an achewood comic with housepets characters. like no particular punchline just sort of a funny situation that the characters personalities would get themselves naturally into. the idea of a french fry vending machine was taken from a yahoo! answer i think they talked about on my brother my brother and me? i'm not sure.

I drew this image of my fursona a while back. shes saying acab, because acab. The censors were because i was considering posting it on a pg discord server and I dont know what i was thinking assuming that would be possibly allowed but i left them because they were funny.

this character is supposed to be this representation of utterly uncontrollable cheerfulness and positivity. she's manic and energetic and does graffiti and skateboards. she wears bright colors. this specific image is intended as an example of her sort of "cheerfully saying 'fuck you,'" anarchic nature!